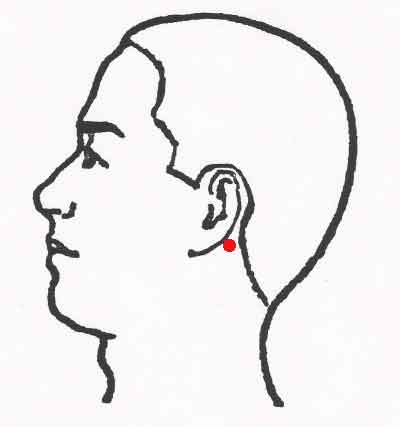 Dokko, is one of the lost pressure points to most martial arts in your modern times. This point has just recently re-emerged to the arts three decades ago, by way of Grand Master Hohan Sokon. This point may have been lost to time if Master Sokon hadn’t reinstated it once again, in the middle 60’s. This point originated in India and was brought to China then to Okinawa and can be witnessed in many of your kata and forms, which are practiced today. But to a majority of the modern systems of martial arts Dokko is still missing as a striking point.

Dokko, a old Okinawa name in the Hogan dialect has been lost to time but in the Japanese tong the name translates to “travels alone” and is also known as Yifeng. It is an acupressure name and is translated, “a safeguard from the wind”. Tien Hsi Poing or Tien Kao is the same Point which the Chinese martial art’s masters translated as ear root.

Dokko resides in the area of the triple warmer meridian, at or near point numbered 17. The Chinese translation is the only term which has meaning to the martial artist. The Yifeng translation is helpful to know primarily from the healing aspect. Yifeng refers to, a place to insert a needle or to put pressure upon to relieve the bodily systems from a unhealthy imbalance. Termed by the inventors of Chinese medicine as too much wind. In the healing arts (acupuncture) this point, Yifeng is used to treat principally deafness, tinnitus, blurred vision and epilepsy. And in the reverse example, these illnesses may in time accrue, because of a strike to Dokko, with out notice.

Test the point like this, place a practice partner down on the floor, with his head turned so that one ear is flat on the ground. Place your Phoenix eye fist, behind the ear that is still visible, (on Dokko point) and put light to moderate pressure on it. Your practice partner will find himself in unbearable pain and will probably try to wiggle out of it. If your partner tries to escape, twist your fist turning the extended knuckle deeper into the point, which will shut down all of your partners motion, repeat twisting in opposite direction if necessary.

Predominantly, the weapon used for striking the Tien Hsi Poing (Dokko) is the Phoenix eye fist (also called, the one knuckle fist). But with special training the point maybe hit with a Spike fist also called, (single finger fist). It is also possible to strike Dokko with a toe kick (tip of the big toe) as well. It is predominantly a striking point, and with some sort of stabilizing support put upon the opposite side of the head and neck, it may be used for certain types of submission techniques.

In a combat situation, it would be very difficult to predict what will happen to a subject who is hit powerfully because.

Because of these reasons, Dokko should be noted as an extremely dangerous striking point. Which maybe the reason for Dokko being dropped from most of the martial arts and from pressure point charts when the martial arts changed from combat to a sport art applications. On the other hand as a control point Dokko is a comparatively a safe point to press.

Now to trap the partner so he can’t recoil and escape, before applying the fist to the Dokko point, kneel behind your partner with the left leg knee on the ground against the back of his head, but with your right leg, place the heel of your right foot against his Adam’s apple or chest, then apply pressure with a left handed Phoenix eye fist, shifting your body towards your fist, putting pressure downwards (into) the point of your knuckle, with your right hand, you may hold him down at his shoulder, (be gentle, push don’t strike).

Ha ,guess what, (yes), it is a technique found in many of your own Kata! Almost all one knee down techniques found in your kata refers to the Dokko point, as well as other pressure points in the general area. Realistically, this one knee down trapping technique is a top level technique for a killing strike, and because the job is now finished, in terms of the ending of this combat situation, the next move in the kata you find yourself rising and traveling in a new direction hypothetically towards the next combat situation.

Dokko is primarily a Nerve strike but in the same process a blood gate strike as well. Again it is impossible to separate one from another. Because in the process of applying a nerve strike to the greater auricular nerve and the facial nerve, you will shock the posterior auricular vein. If the strike goes deeper, to the place where the stylomastoid foramen lays, all the above will be endangered. Therefore, a powerfully deep strike can not be reversed, death will be impossible to escape when using the twisting technique, fore this will stretch all nerves and rupture or possible burst all arteries and veins.

Dokko or TW # 17, best strike time is between 1pm and 3 pm. Iit is a Yang meridian and a fire point. There are several combinations which can be used to enhance the effect. Found in the Small intestine and bladder meridians. But the use of the element chart is not necessary, Dokko is a sufficient death strike all on its own. The element and time theory might be used to insure the outcome.

An additional technique which maybe used with the Phoenix eye fist is a twisting action (mentioned above) after penetration, which will put pressure on the hinge of the jaw and shock the nerves running through that area. This on its own will cause great pain (again mentioned above). This pain will cause the jaw to open making the opponent ready for a secondary strike to break the jaw bone itself, or cause a knock out on it’s own, to say nothing about any combination. Striking Dokko is sure stop action when hit superficially.

Warning, do not play around with this pressure point. Dokko will cause death, there is no way to reverse the out come. Use light to moderate pressure to explore the point. DO NOT STRIKE. Practice striking and twisting on a heavy bag or another type of dummy object only. Never strike a human being for practice.

Tapping or knocking is a Chinese term for practicing on a practice partner. It is like knocking on a door or in the same way you knock on a door you can tap on a point That is as far as the Asian schools would go in the practice of their two man sets. A powerful strike would never be used on a partner. The power strike would only be used on non living object. So don’t be foolish, do thing right! Knock don’t strike. And as far as knocking goes, this often will cause illness, if done often. Just like a high impact can cause permanent damage, low impact done frequently can cause the same amount of damage. Low impact tapping can amount to high impact damage with out sufficient time for healing. So with knocking, once is enough, then give you and your partner three days to a week to heal to a point of full recovery. In this way you and your partners can learn and be safe and live a long and healthy life. Also Kata is an great way to express power even if you don’t really know what it is you are doing you can learn to express power. Later these techniques we come into the expression with power through kata.

From a confrontational aspect, the opportunity to strike Dokko correctly will not come easily because you would have to station your self half way around the back of your opponent to strike at the correct angle. But if you contact the opponents first strike from the outside (rather than the inside) you can instantly strike Dokko without notice with your opposite hand. There are many ways to get into position to strike Dokko but I find that you would have to maneuver to your opponents side. In other words slip the clash to the outside and with a slight inward turn. The point will become visible and the strike can at that point be made.

If you have any problems figuring out how to get in position to strike Dokko, or have questions about any other pressure points I have listed, e-mail me from our web site. With your name, e-mail address and the martial arts system you study or post to the site and I will (in time) do the best I can to answer any questions that you may have.