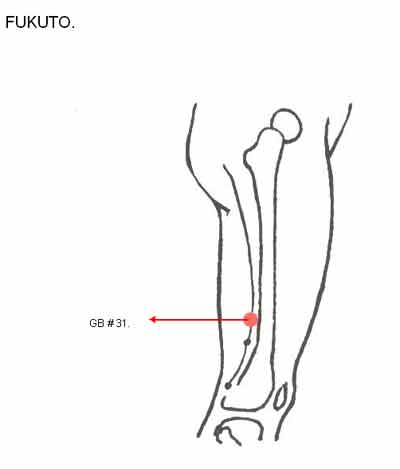 The Gall bladder meridian is attached to the Liver which means that they communicate with each other. The main function is in the aid of the digestion process. When the gall bladder is functioning well, the Qi (energy) runs in a downwards flow. Illness can be determined by outward emotional changes in a patient and there will be changes in the Gall Bladder and liver as well. There maybe signs of irritability, depression along with constipation. A strike to the Gb meridian may show these illnesses and may go unnoticed until it becomes chronic. So if you practice striking points on the Gb meridian it would be wise to watch for these signs in your students as well as yourself. All Gb points may be used for self defense striking, and there are 44 that are of practical use.

On the lighter side when I was in Junior high school on the way from classes some kid would come out of no where and hit to the side of a another class mates thigh with his knee leaving his class mate there writhing in pain. With out knowing it we were learning one way to strike the pressure point, known as Fukuto (Gb # 31), and by the time we reached high school we got very good at delivering a surprise strike to Fukuto in a street fight, which unfortunately, there were plenty of!

The best way to find Fukuto point is to stand up straight in a open toe stance, place your hands against each side of you (body) thigh. The middle finger of each hand will naturally land on Gb # 31- Fukuto.

Fukuto is located, 9 inches (cun) down the outside of the leg from the hip socket, as well as seven inches (cun) up from the outside crease of the bend of the knee. Fukuto is where these to points meet, on the line between the greater trochanter of the femur and the head of the fibula. There the iliotibial tract (band) stretches the length of the thigh and it’s muscle, the tensor of the fascia lata, helps to keep the dense facial sheet taut, thereby assisting in the maintenance of the erect posture. This is some of the reason for the reaction which is stated above. Also the lateral femoral cutaneous nerve is located there which may be responsible for phantom pains that may display itself hours later by way of rapid contractions in many cases.

The most difficult strike to preform is a Dim hsueh ( blood gate) strike to the circumflex artery, reducing or even stopping blood flow in the leg and eventually stopping all blood flow returning to the heart. This type of strike is very rare because the techniques used for blood gate strikes are very different than the common strikes. A blood gate strike can only be done with a PRESSING strike. This would take extraordinary strength in the hand or foot weapons. Death would take place in this case anywhere from 4 to 48 hours. But don’t worry, if you are reading this article you probably are about 10 years away from performing this technique after learning from a temple master.

All Gb meridians have the capability of producing various effects up to and including unconsciousness. The proper time of day or a certain temperature change or change in season can contribute to the out come, As well as transfer of Qi into or away from points which may enhance effects as well. Combinations of points can exacerbate the outcome. If all of the above were to be used at once, the effect can extend to the point of death or delayed death.