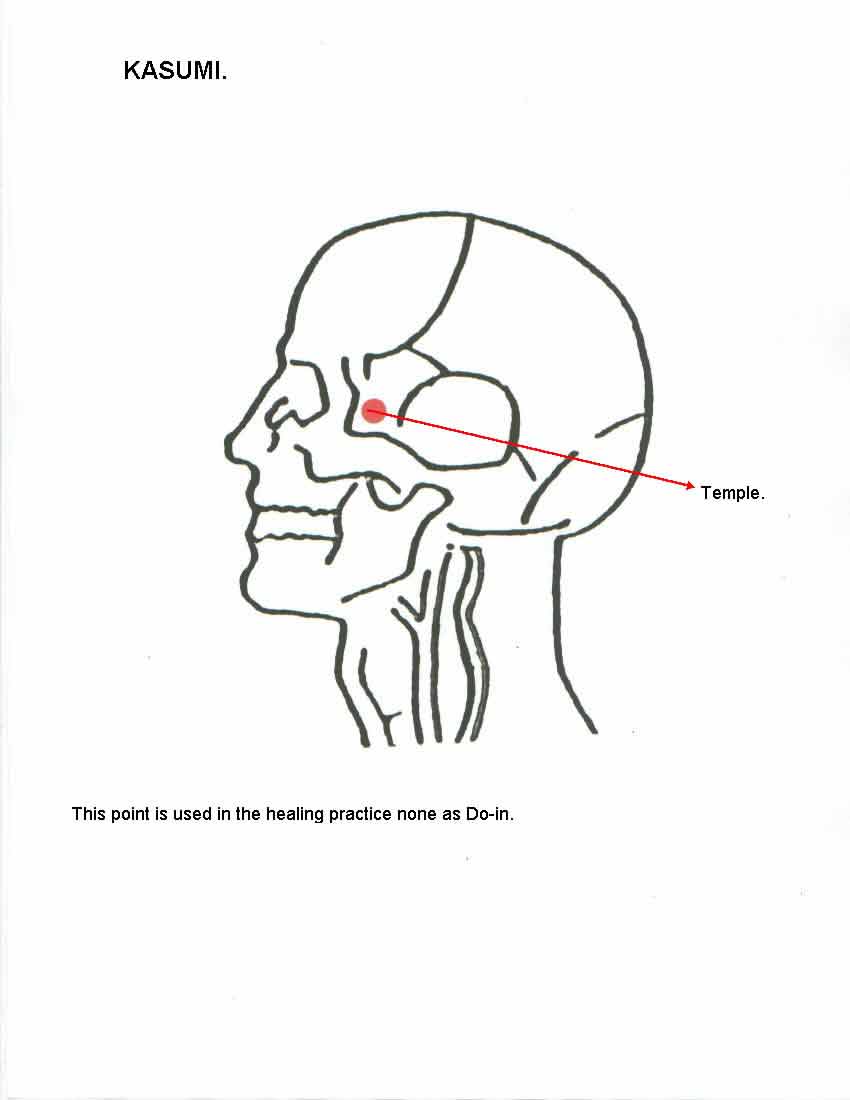 Kasumi, This particular area of the body (temple) is translated in various ways by the Asian martial systems, which in turn always creates problems in determining which point out of the many point in the temple area is the correct one. As you study this area (temple) you will fine discrepancies on which point is the striking point kasumi. Some Masters say that the temple strike is located at GB#3 and some say the point can be found between SJ# 22 and 23. Also the stomach meridian is sometimes referred to because it runs very close to the temple area. Not to cause offense to anyone of the great pioneers, these points really don’t run through the area of the temple, which is most sensitive, to a blow. In my studies of the manuscripts that are at my preservation I believe that tai yang is the correct point.

The manuals artistry, from that time period, in my opinion could have been better. This problem alone would make a student say I give up! Fortunately for me, we were shown and instructed in the Do Jo, on all the strikes and the top students were given the manuscript later. These manuscripts had names, locations, weapons used, and damage caused only. The use of coupling a strike with an acupuncture point started with the first booklet on striking points in Chinese and English called “DIM MAK” – the poison touch technique of Chinese kung fu. As a help to the students who were without striking point studies in their Do Jo, who wished to study the basic strikes outlined in this booklet. Charts using acupoints were written in to help locate them for the beginner students. In the schools of the 60’s that I studied in, acupuncture points were not given to student’s, just names were. In short, the teacher would have a student attack. The instructor would block the attack, then show a strike and outline by name then tell you the result.

Today, the use of naming meridians and numbering points, although being very helpful to some, can sometimes get confusing. When, for instance, the incorrect point is numbered, and as one studies the point and its meridian nothing seems to add up. In that case you need to continue the search to other meridians. Also the fact that the area of attack may not even be an acupuncture point at all cannot be over looked. In the naming and numbering of these particular striking points, the closest point to the target area would be extra ordinary point Tai Yang. Although Tai Yang is not exactly on the mark it is closer then all the rest. And as you can see from the above outline, Tai Yang is locating for you the proper nerve and veins and arteries in which to strike.

First of all this point, like many other points, can only by accomplished when some simple rules are followed, which will be addressed at a later date. Also in the case of the finger strikes listed above, these types of strikes will need to be trained for as well. The strike to start out with would be the one knuckle strike, some schools call it the trigger finger strike. This fist style takes very little training and has a lesser chance of injury.

Now lets talk about the above outline, the name Kasumi, which means mist. I believe that this point was given its name because of what happens to a person that is struck with a hand or foot weapons at the temple area on either side. When a person is hit lightly with a sharp strike with the method of knocking on a door, a slight arcing motion, the opponent will become momentarily faint; dropping slightly, his thinking process will slow down become unclear as if in a fog which bring about the mental image of mist.
The power from the strike must be straight inwards so that a pulse or vibration is sent through the frontal lob of the brain. This would produce a momentary k.o.
Some styles perform a temple strike elevating it to a deadly level by using a powerful strike with the tip of the toe or heal. Although this type of strike is very hard to master as well as control, it is effective as well as deadly. A light strike is pretty much impossible when using a toe or heal kick. All the sharp strikes listed above, would reach a minimum depth 0.3 to cause the suture in the temple area to break and do damage to the temporal lob which would cause death.