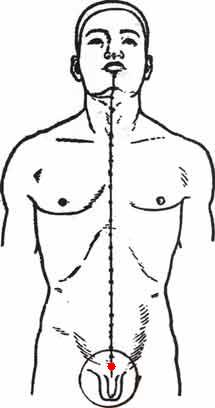 Figure # 1, is a drawing showing the front view of the Cv meridian and a circle has been drawn around the area of attack showing the entire striking area of Kinteki.

Today, the majority of martial arts schools simply write off the application of kinteki. Of course, we all know a kick to the groin has a lot of stopping power and that is why tournaments as well as full contact fighting, has outlawed this vital point.

I became aware that the old charts, show the area of Kinteki is located on a higher area of the body than the testicles and in all cases has been listed as fatal. I became troubled by the notes and eventually I was required to examine Kinteki more intensely. Of course this problem may have been in the drawings or in translation, So I pulled out the old text books and scrutinized the question more closely.

The original master who wittingly penned the named Kintei must have thought quite a lot of the striking areas effectiveness and may have had a sense of humor as well. When Translated into English Kinteki means, BULLS EYE. This indicates that it is a primary target area in any language. To say that it is a pressure point, could be considered inaccurate, for the reason that, in this general area there are several vital points as well as acupuncture points. The combination of the vital and acupuncture targets may surely produce a fatality and some of the singular points may cause lesser individual effects. The worst of them is Kidney # 11 a target just off to the left of CV # 2. Alone K # 11, can cause the kidney to become dysfunctional even discontinue function completely. When the kidney stops it’s activities it will rob energy from the heart and other organs, which in turn will halt all life functions. K # 11 can be a fatal blow on it’s own, when used with other points like, BL #23, 34 and 37, K # 10 and 11, Pc #6, L #5, Cv # 3 and Gb # 20 as well as many combinations of earth points.

In the case of the pressure point, CV # 2, located on the center line of the body, to the left of K # 11, The Ren or CV meridian starts at the lower abdomen and rises interiorly through the center of the pubic region were this point is located. The Ren meridian is not associated with any organ of the body but is responsible for circulation of Yin Qi which continues to supply the GV and the Bladder meridians and therefore CV # 2 is mandatory for the circulation of Yin QI to all the organs of the body. Stagnation or stoppage at CV # 2, will cause a slowing of energy flow through out all meridians and create dysfunctions through out the entire body. In other words, due to slow energy flow will reduce body motion.

In the case of the testicles, pain can be caused by light temporary pressure alone. In most cases, the effects are temporary and will subside in one to three days. We would have been better off, if the creator placed your testicles inside the body when it comes to combat, and many old systems teach their students to do just that, pull the testicle up into the body before combat starts. but the testicles naturally hang out side the body for the reason that they need to be cooled for the purpose of reproduction. A Light but direct strike to the testicles, will do enough damage to stop almost any attack instantly. The testicles themselves are made of a sponge like material, the combination of the two properties (hanging and construction materials), absorb most of the shock, therefore damage is usually not permanent.

Examples of serious testicular injuries are testicular torsion and testicular rupture. Testicular torsion is when the testicle is spun around or twisted, cutting of blood supply. This can happen if for example the method of kicking is indirect rather than direct, which can spin a testicle around. The cure in this case is to turn the testicle back to it‘s original position. If done correctly, relief will come instantaneously. On the other hand, if you are struck in the groin with the direct method and the pain does not subside after two or more days this is most likely testicular rupture. Testicular rupture is when the testicles receive a forceful direct blow which can crush them against the pubic bone. Causing blood to leak into the scrotum. In that case surgery will be needed to correct the damage. There is a third possibility, a fracture of the pubic bone itself, In this case, walking and the ability to keep balance becomes very difficult even impossible, and again, surgery will be necessary. This type of strike, must be a very powerful thrust to cause the fracture at the central part of the pubic bone. And again the angle should be delivered towards the body cavity.

The iliohypogastric nerve, eventually connects to the spinal column and the gastric nerve to the vagus nerve. This nerve found in the striking area, may account for the shock to the body’s systems. The slowing by way of swelling, of the arteries listed above, may also account for shock to other system of the body.

One of the first strikes I learned to apply to the groin area, was to use the top of the foot for a striking surface with a front kick. Which is revealed in the applications of the first Shorin Ryu Kata, a basic kata technique which turns north to south, Crane kicks to mid level (groin), Then a High X block ( which is really a choke or take down technique) is the parameters of the attacking defense, exposed in the kata. This simple technique maybe used, in the cases of a attack from behind. Which works really well. This (top of the foot style) has little permanent damaging effects, the ball kick works a little better because of it’s angle, but the two kicking styles lack the ability to penetrate deeply. The toe kick, on the other hand, can penetrate deeper but has less mass. The three styles I would say are equal in value and are sufficient for causing temporary pain and light shock in most cases.

Several years later, an Okinawa Master instructed me further, when he demonstrated a more complicated way to strike this area. He demonstrated a spinning double back kick. Execution of the techniques is as follows. After applying a north to south turn (which will station your back to your opponents front) the first back kick strikes the lower leg, causing the knee to snap back and lock, which in turn, causes the leg to become straight and stiff, an the opponent starts to fall backwards, (there is no defense at this point for the opponent fore he is momentarily helpless to defend himself because he is falling backwards) placing your leg back on the ground, a second kick is then executed to Kinteki using your opposite leg, striking with the entire sole of the foot which give you the correct angle as well as sufficient mass. This is a deadly application because it strikes the entire area, which includes all vital and acupuncture points listed above.

Yet another master, demonstrated how to use a fist style call immortal man with a whip like action called a dragon snap. This is what I now call, an answer to the old question, “so you know karate ha, show me your stuff”. If done correctly, this strike effects bladder control alone with intense shock and is very embarrassing to the one insulting your intelligence. Execution is as follows, Standing toe to toe, using a continuous blocking action, shifting your stance to a horse stance, so that his stance and your stance together form a T shape. Change the hand shape as you continue the block (with out stopping the motion). Change hand style if necessary to a two finger shape ( immortal man style which is with the index and middle finger extended, and the other fingers closed with the thumb holding them down) with a simple method called dragon snap, a quick forceful whip like action strikes the testicles with the finger nail side of your hand. The finger nails strike the testicles, and the back of the hand strikes as high as it naturally will. If done correctly, you will have to lead your opponent to the rest room! His bladder may release it’s content. This strike produces light intense shock alone with loss of bladder control do to insufficient mass coupled with great speed at an indirect angle.

Now the shoto can be used in a similar way as the dragon snap. Also a flat fist style or even an up elbow or knee strike are commonly used. Even a grab to the groin is commonly used in many Chinese fist styles. In our school, there is an old saying, When you have a man by his *****, his heart will surly follow!