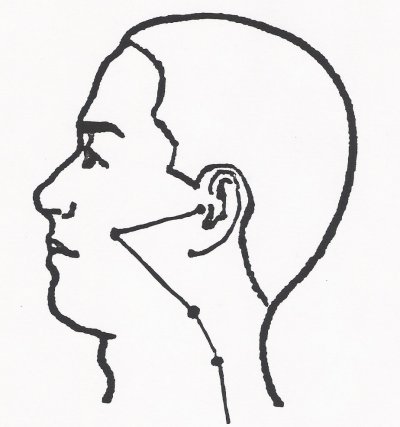 Shofu’s location: in the lateral aspect of the neck in the posterior border of m. sternocleidomastoideus, posterosuperior to futu (Li 18), Its medical indication is for the treatment of, sore throat, sudden loss of voice, deafness, tinnitus, stiffness and pain of the neck. The small Intestine contains 19 acupoint; nine of these may be used in the martial combat.

As far as Kata is concerned, Shufu is a point location found in many intermediate forms. It is also one of the first striking points shown to a student of the art, (often shown with a palm up shoto strike, hence its name Shofu woodcutter). It is one of the simplest strike to get some kind of a reaction.

Shufu is primarily a blood gate (Dim Hsueh) strike rather than a Dim Mak strike, for the simple reason that it attacks the arteries and vein in that part of the neck rather than the nerves. This legendary strike is primarily a strike that attacks the ascending cervical artery, Dim Hsueh using a special sealing technique to activate it. This technique is a special pulling motion that reacts like an old fashion paper straw in a glass of milk, when the straw is pressed and pulled in the direction of the flow of milk; it is possible to create a vacuum and slow or even stop the flow of milk in the straw. A similar reaction maybe achieved along with or without this blood gate striking technique. If you are not acquainted with this type of blood gate technique, a pre-emptive strike to Pc#6 or Gb#20 to 24 will cause a similar reaction as well.

Also a strike to the cutaneous cervical nerve at shofu, the emerging portion of the greater aurucular nerve is more or less a Dim Mak strike that will cause a reaction. This point will cause fainting or even unconsciousness very easily on its own. This point maybe combined with Lu#5 to 8 as a preliminary strike, this combination will elevate Shofu into a possible death strike when combined with the best strike time 2 pm.

I list this type of strike in the category of extremely dangerous to practice, depending on the age and health condition of the person struck, shock, coma, dew to changes in blood pressure and damage to the nerves.