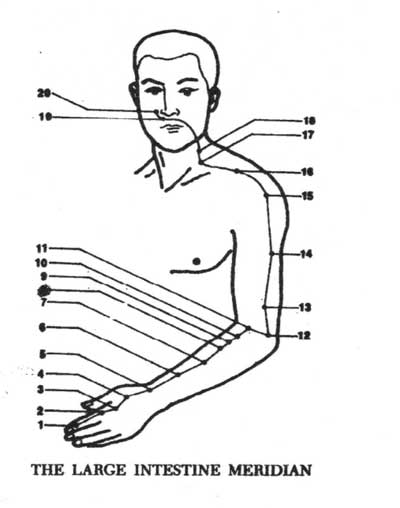 The Large Intestine (Li) meridian starts just behind the finger nail of the index finger, running up the arm across the shoulder up the neck, running beside the edge of the mouth ending beside the nose, 20 PP in all. The organ itself sits in the abdomen and connects to the small intestine and anis. The Li communicates with the lungs and both Li and Lu are metal organs and meridians, The Li meridian are listed as yang, which means that the energy flows upwards or toward the head, but the lung is a Yin meridian. The main function of the Li organ, is to receive and excrete toxic waist.
Li # 4, point is a mega healing point, every first year acupuncture student, knows this point, for it can be used to treat various illnesses, some of them are, Pain in the face combined with Liv # 3, and is used to cure pain in many parts of the body combined with Li # 11. Li # 4 is used to lower high fevers, also the point is used to help reducing labor time (do not treat a female patient with this point if pregnant – may cause miscarriage). LI # 4, relieves jet lag, reduces sweating, has a calming effect on grief, it is also used for strengthening defensive Qi, expels wind, benefit’s the face, eyes, nose, mouth and ears, activates it’s own cannel and restores Yang. The best time to use LI # 4 for healing is from 6 am to 8 am.

From a martial perspective, Teko Li # 4 (s) best strike time is 5am to 7am. Teko may be employed in three ways;

What I mean to say about trapping is, if the hand of the attacker can be ensnared against his own body or against the ground or against your body, then it may be hit with enough power to activate the points and have results, other wise, it will just be pushed away and the needed penetration will not be achieved. For instance, if your arm is grabbed, then the opponents hand may be hit or pressed with your other hand. Or if you are being pushed, then with your hand, press the attacker’s arm down, and with your other hand you will be able to strike Teko.

The clasping technique is best used to release holds or grappling techniques, like the ones used in Judo and Jujitsu. One way to perform a clasp is to place your index finger on Li # 4, the thumb on L # 10, on the opposite side of the hand (property listed above). You will find that if you reach from your opponents wrist (thumb side), you can use the very tips of the index finger and thumb to place even pressure on both points. Your opponents hand will open (releasing you from a hold or grasp and even some suffocation techniques. The clasp will not produce fainting on it’s own, but because Li # 4 and L # 10 are both metal point, one of the wood points can be used for a secondary strike for example, Liv # 13 and 14 and Gb # 20 can be used but will have differing effect than are listed above. In the case of striking, the same rules apply. Teko is a metal point on it’s own, if your strike isn’t powerful enough, a secondary pressure point point can be used form the meridians Liver and Gall bladder. Some of the other effects that are note worthy are loss of strength in the hand, and numbness in the forearm, upper arm and shoulder do to the venous network of the dorsum of the hand. And the superficial ramus of the radial nerve, which is a connecter to the radial nerve of the radial side of the arms. This same principle works (in the case of lack of power) can be noted for all pressure point strikes as well. A strike with out deep penetrating power, due to lack of speed and purposeful focus through, and emotional purposefulness, will not produce enough penetrating impact to transcend past the superficial dimension. In this case a lack of repellent QI discharge can not be transmitted. So the results are less in effect <Numbness> at most <Fainting> but the effect of death can not be realized.

This phenomenon creates a possible problem, although not often seen, accident death is possible by unintentional transfer of Dirty Qi to any pressure point that has a possible effect of death. This accidental death phenomenon is not likly to happen but is possible! How do I know that? It is adocumented fact, thats how! The prevention for this potentially deadly accident is: Practice with a happy peaceful spirit! Do not try to invoke a reaction in anger or stress when in practice with a partner. Play nice in the sand box!

The hammer fist is the most used strike in kata From Okinawa, for example, in the kata Chito, there is a technique were the left opened hand (tips of finger pointed toward opponent) is hit with the other (right) hand with a hammer fist. This technique may be interpreted as:

In some Chinese forms, when you see two open hands striking each other with both palm heels, this also may be interpreted as trapping and striking simultaneously at Teko. The Buddhist praying hands (two hands together in prayer) may also be a simultaneous trap and strike to Teko. The use of a Shoto strike to Teko is found in other karate forms, one of them is found in the Shoalin long fist form called, Lien Bu Chuan (continuous stepping sequences). In this form, it shows the defender blocking a fist attack with his one legged crane stance, where one leg is lifted and bent at the knee at 90 degrees, so that the thigh can be used for parry a strike to the abdomen (middle gate, similar blocking tech in Chinto kata) at the same time a shoto strike to Teko or to the (Tigers mouth point) is performed. In the Kata, Shin Shu Ryu (vast open mind ) the same crane stance is used to parry a fist attack, but instead of a shoto the strike is performed with the elbow, (limb-destruction). There are several other forms showing different ways to strike the point and many other kata show the usefulness of the clasping techniques like Pai Sai Sho and Dai, white crane kata.

Now when it comes down to the finger tip strikes, this is a special training strike and usually can not be performed by most instructors. Although these techniques are practiced in some traditional kata and forms, the training in the majority of cases has not been practiced. Unless you have been trained for this in a high quantity traditional school system, there is no necessity to try it. This training has been discussed in prior articles. The clasping technique on the other hand, may need very little training in most cases, but strengthening the muscle groups involved in clasping Teko, would be wise. Now to find Teko, use the clasping technique on your other hand. The point will be found next to the metacarpal bone use light pressure. When you feel some slight discomfort, you have found it. Now you can practice the strikes or the clasp on Teko. Now you can start to build up the techniques mentioned above and you can also discover some of your own.

The only difference between the Tigers mouth and Teko is, Teko is struck or clasped at the top of the hand, the Tigers mouth, is a sharp pointed strike to the opponents opened hand between the index finger and the thumb. I have found in some Chinese charts that Tigers Mouth pressure point is categorized as fatal, but in the Okinawa charts it has been categorized as causing fainting. Although there may be a possibility of death, it seems to be a remote possibility.

My reasons for curiosity is:

The answers may be found in several possibilities.

These are all possibilities to why the Chinese perspective differs from the Okinawa viewpoint. The Okinawa chart lists Teko alone as causing fainting. I’ve found that fainting would be difficult to produce by striking Teko on it’s own. More likely great pain or numbness is more probable than death! I found that many Chinese forms (Kata) show that in the case of the Tiger mouth point a primary or secondary strike is needed to produce the death effect. My analysis is that the organ, nerve and artery involved with Teko would probably not cause a quick reaction other than moderate pain or numbness, unless there were other factors involved. My position on the Okinawa charts which states that, fainting would be the ultimate outcome and the most accurate in the case of striking a singular point strike. The Chinese viewpoint is some what misleading in a way, because the other circumstances that would be required to cause death, have not been noted! So, I have listed the possible effects as,

I sense that the use of Teko, is a relatively safe pressure point to employ as a technique and is manageable to revive and can be used and practiced in the Do Jo, under proper supervision. Strengthening exercises should be practiced out side the two man set because accidental illness may manifest itself with out being noticed. When practicing in a two man set use restraint, in this way, illness may not happen. A side benefit is, as time passes, you may find that (like in all practice of two man sets) A resistences will slowly take place to a strike to points practiced.

Note: These circumstances (the fifteen rules of interacting PP) I am not at liberty to list at this time.