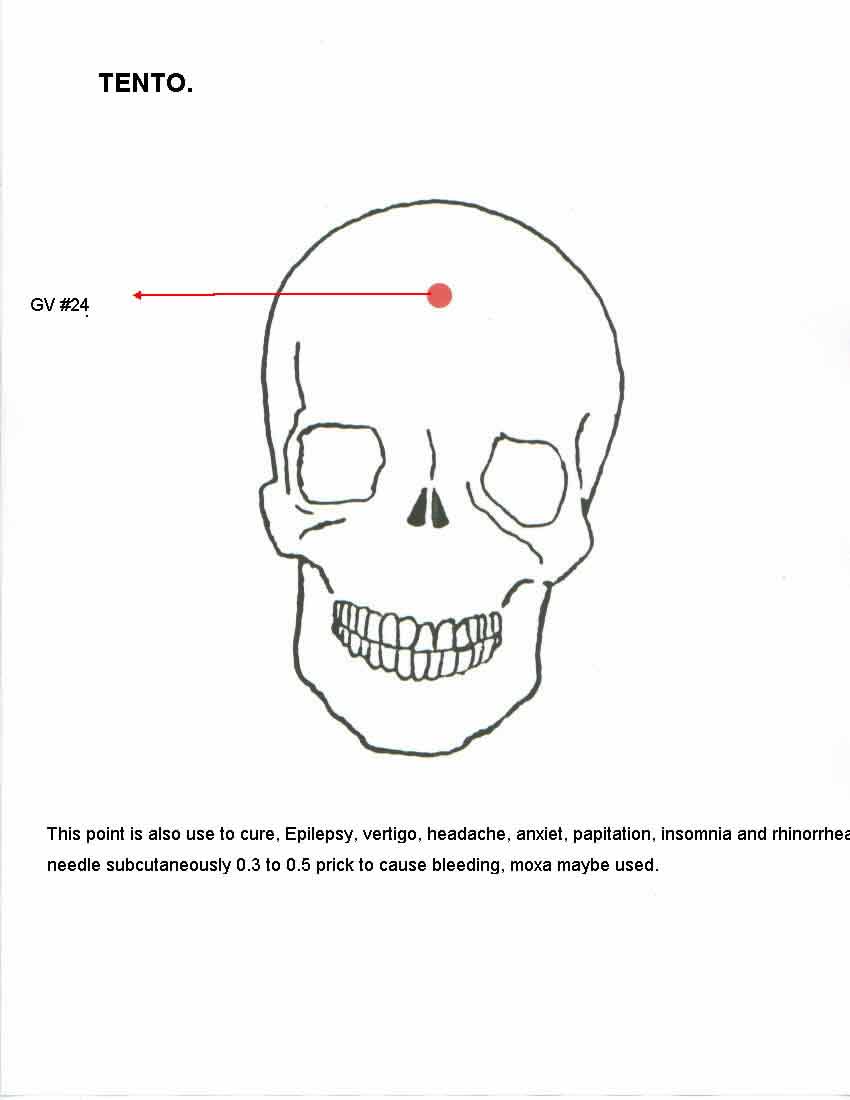 Tento, translated the sun and or provident, is located on the centerline one half inch above the hairline at GV 24 in the Fontanels. The Fontanels, is were the suture in the center of the forehead is found Note; To help you find this suture place you finger on the top center of your forehead. Run your finger from left to right, back and forth. You should feel an indentation that runs up the center of the forehead between the two orbital up into the hairline. When you come to the top of the indent, you are approximately in the vicinity of GV 24 or Tento. Lets take a moment to describe the Fontanels because it will help your further understanding of Tento. Before birth, the bones of the forehead at the vertex are separated in two parts held in place only by membrane. As time passes, the two sides of the frontal bone knit or suture together. This suture is somewhat stronger but not as strong as the surrounding bone structure.

In this same area the frontal nerve is also located, it is the largest division of the ophthalmic nerve, and may be regarded, from its size and direction, as the continuation of the nerve. It enters the orbital above the muscles structure, through the sphenoidal fissure and runs forwards along the middle line, between the levator palpebrae and the periosteum. Midway between the apex and the base of the orbital it divides again into two branches, supratrochlear and the supra orbital.

The frontal vein commences on the anterior part of the skull by a venous plexus, which communicates with the anterior tributaries of the temporal vein. The veins then converge to form a single trunk, which runs downwards near the middle line of the forehead parallel with the vein of the opposite side, and unites with it at the root of the nose by a transverse branch called the nasal arch. Beneath these resides the brain or more accurately none as the longitudinal cerebral fissure. A in depth study of the bone structure nerves and vein will give you a greater understanding of the above effects and results involved in striking this point.

About the QI factor, the Du and the Ren cycles or Gv and Cv systems govern the chi flow in the whole of the bodies systems. A disruptive QI strike to the Ren or the Du channels can bring about a quick or slow result depending on the mastery of technique as far as accuracy and the ability to transmits to the weapon angry QI. The most popular weapon for a Qi disrupting strike would obviously be the palm heel, used in a downward direction.

A strike not using Qi will only impact the skull, nerve and or vein at (Gv 24). In this case, the weapon would strike at a high speed of impact and the result would be instantaneous. Impacting the skull for a deadly result, concussion or fracture, weight would be a factor along with high speed. Not so with impact to the brain, vibration is the primary technique used. Can you guess what weapons might be used to produce a fracture? There are three. The hammer fist, the heel of the foot and the elbow. Where as, fingers strikes along with the palm heel would be used for strikes to the vein along with the transmission of Qi.