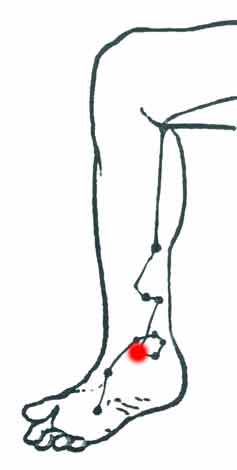 Uchi Kuro Bushi, is translated from Japanese into English as, “inside suffering warrior” or warrior who suffers inside his body. This title indicates a fighting man that suffers greatly within the body or a warrior who is very sick, for a extended period of time. These words literally tell us that “the man who gets struck in this pressure point ( Uchi Kuro Bushi) may become very sick or ill in many ways.

If the pressure point Geshu is translated, “influential point of blood”. Xinshu is translated, “back-shu of the heart” telling us something about the way the point works. Sometimes the name will tell us were on the body the point is located like Tento, or what it heals or what it is doing. Uchi Kuro Bushi name is different from most of the rest. Uchi Kuro Bushi indicates a point that if hit will make you very sick. Now if you read the above indication and the result like any pressure point it tells you that there is always a possibility that striking a pressure point may make a man ill in the ways indicated. Uchi Kuro Bushi‘s title lets us know that this point, when a man has been struck may become very sick. The title is it’s warning indicating, as if to say“ Don’t play with this one”!

Master Hohan Sokan when listing Uchi Kuro Bushi upon his chart, had very little instruction there to help a student learn about this point. There may have been a very good reason for him to do this. One reason for master Sokan to do this may have been, Uchi Kuro Bushi, is a pressure point reserved for only the high ranking top student in his school alone. Only the top ranking student would be shown how to successfully strike this point. There was a very good reason for this too, Uchi Kuro Bushi, is without a doubt, the most painful long term slow death point of all. So although this point was listed on his chart, no instruction was written. In fact Uchi Kuro Bushi is one of three points out of the forty-four points listed, with out a result! It seems that Master Sokan wished the point not be lost to time, while he also was concerned about the point getting out to the public. Uchi Kuro Bushi has been given verbally only, to the Ichi Bon Sito or number one student that is till now! Although some people know of the point called Uchi Kuro Bushi I have never met any one who knew anything about it if they even new the point existed at all!

Uchi Kuro Bushi is the 6th point of the Kidney meridian. It is located on the big toe side of the leg below the ankle bone of the right leg (left leg has a lesser effects than the right).The Kidney meridian connects to the bladder. It’s function is to store chi essence and to dominate the reproductive systems and to govern the water metabolic systems and reception of Qi. The Kidney meridian is a yin organ and it’s element is water, it’s energy flow travels in a upwards direction. The best time to influence the points of the kidney meridian are between the hours of 5pm to 7pm. The formation of the greater saphenous vein on the medial aspect of the foot and it’s course anterior to the medial malleolus runs up the medial aspect of the leg. Then branches off the saphenous vein accompanies the great saphenous vein to a point below the knee. The function of the cardio vascular system is to return blood by way of the deeper veins and the veins that accompany the anterior and posterior tibia veins which originates in the foot and joins at the level of the knee to form the popliteal vein. The latter becomes the femoral vein as it continues it’s extension through the thigh, as the leg is drained by the saphenous veins to the popliteal vein.

The saphenous nerve is the largest branch of the femoral nerve. The medial crural cutaneous nerve is also a sensory branch of the femoral nerve. The tibia nerve is a sensory nerve which is deep under the rest and it’s signal runs downwards into nerves of the foot. The above nerves and veins are all femoral in nature and that is the key to it’s general impact on the body (study femoral nerve and vein). Uchi Kuro Bushi or Kidney #6,  In eastern medicine, a strike will slowly destroy the kidneys eventually and cause death. In some cases, the mind will be effected first even to the point of insanity. It may even bring about suicidal tendencies along with schizophrenia or personality changes. This may go on for months or even years until death takes him by way of kidney failure or by the subject bringing about his own death. Before death though, all the illnesses listed above may take place as well. And alone with these a list of other complications from nerve and artery damage is a true possibility.

Uchi Kuro Bushi-(K #6), can be preloaded by striking points on the spleen and stomachmeridian, also GB #25 and CV # 2 & 3.  The weapons listed by Master Sokan maybe misleading for reasons which have been already discussed. I have added the toe kick because, although it is hard to perform, it works better than the other two listed.  After the toe kick has been mastered then a specialized toe kick becomes a necessity to master this point the arch of the travel of a normal kick needs to be restructured from the kicks natural travel. It needs to strike at a straight level plan and after contact has been achieved, changing from perpendicular to a upwards angle is necessary to have any degree of success. After that a twisting motion is added to turn the flow of energy against itself. Chi is also transmitted into the body against the flow to enhance the blockage of energy flow as well as blood flow at this point. The effect are unalterable.

Historically, this point was used only as a punishment to a war lord of ill character to show the general public that there is a penalty for dishonorable behavior. It would probable not be used for assassination for there are quicker easier ways to end a life. This point was used to promote a slow cruel way of death that may take years of pain as well as mental instability to come to a completion.

It is easy to see why this strike is considered a strike for masters only. There are no grand masters today that will teach this point. It is a lost pressure point for the most part in our time for many reasons. In my generation the toe kick has been shown only in some Shorin Ryu schools of Okinawa. In this case, we would be forced to rely on the hammer fist and maybe the dagger which needs years of training also. In our day with today’s time restraints the toe kick and the dagger and the time taken for training, makes these weapons difficult and impractical. The hollow hammer fist is primarily a weapon given to many of the Chinese systems. This Hammer is not a tight fist that which is commonly used. The hammer is formed as if you were wrapping your fingers around a iron bar. The hollow wraps around the point. The striking part of the tight hammer fist (in this case) would be the small knuckle on the little finger side. This type of hammer fist will take very little training but like the dagger hand may only be used in offensive movements. The hammer maybe used in a down block to a front kick, But the toe Kick can be used almost anytime. I Feel that it needs to be said that the toe kick is another way to utilize this pressure point.  In fact there are several points were the toe kick can work best, some of them are, Yako, Fukuto, Inazuma, Myojyo, Godenki, Bitei, Ushiro-Inazuma, Sobi, the super chi point as well as Uchi Kuro Bushi. The fact that it is a blood gate, a nerve gate and a chi transmition point, if one of the three is missed, the effect would be less. But if studied, and mastered, and used in full as described above, a long, slow, punishing death will result.

Train carefully, on the left leg of your partner, striking very lightly for aiming practice only. Do not strike hard even on the left leg. This point can have a very bad effect as well.

I define Uchi Kuro Bushi as not just a dangerous striking point, it is an insidiously dangerous striking point. DO NOT PLAY with this point, train only with a supreme grand master with a long history of training with other Supreme grand masters with training in combat, that has this point in there graphic representation (personal chart.) and are willing to train you. Remember the life you save maybe your own!