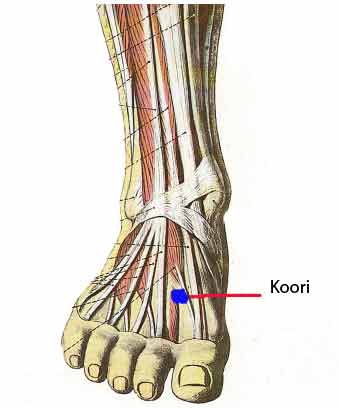 The most unexploited striking point on the entire body are the ones contained in the feet and ankles. If you have studied with me or you attended one of my seminars, I most likley demonstrated one or two techniques for Koori right off the bat, along with other foot and ankle points. It is one of my most coveted techniques for sparring as well as combat. Everyone I’ve shown them to is using them. Why do I use them? No one expects it! if people at my seminars haven’t used them, they probably didn’t understand the simplicity of the strategy. But before I give you the techniques implicated and the methods and strategies involved, and why it worked so well for me, Lets study about Koori (Liv # 3) and how it functions.

The name Koo-ri meaning two way advantage may refer to the two possible ways that it may be used. Iit may be used to ward off a attack or you can cause some significant damage. Maybe it just refers to the two nerves that run down the first two toes. One thing is certain, there are many combinations of “two ways” to look upon it..

Liver # 3 or Koori is located on the dorsum of the foot in the depression distal to the junction of the first and second metatarsal bones. For notes on the Liver’s organ and meridian, function and result, see forbidden pressure point Inazuma. The striking point Koori or Liver # 3, is used by the healer to help cure illnesses like, insomnia, congestion swelling and pain of the eyes, depression, infantile convulsions and epilepsy, deviations of the mouth, pain in the hypochondriac region and uterine bleeding. Other cures for other illnesses can surface if Liver # 3 is struck, some of them are, dizziness, vertigo, fainting, great pain, may cause ill feelings in the abdomen. The liver meridian connects to the Gall bladder, so a strike to Koori will effect the Gall bladder as well ( see forbidden pressure point Inazuma @ notes and indications also Gb # 37). If Koori is struck in combination with Gb # 14, 15, 24 and 25 it will cause fainting, but it is possible to strike Koori alone and fainting may result. The foot itself is in nature, a very sensitive appendage. If someone has ever stepped on your foot or maybe you’ve dropped something heavy on your foot, you already know some of the effects involved. Why does it hurt so much? One reason is that there is very little muscle structure to protect the nerves, nerves of the bone , arteries and veins. Also the toes of the foot contains five meridians seventeen pressure points, some of them are, St # 45 and 46, Lv # 1 to 3, Gb # 41 to 44, Bl # 64 to 67 Sp # . There are several ways to use more than one point at a time. In the case of Koori or Lv # 3, it is one point that you may find effective on its own or combined with neighboring points as well.

The deeper peroneal nerve is a terminal branch of the common peroneal nerve, passing into the anterior compartment of the leg and supplies the anterior tibia muscle, the long extensor muscle of the big toe, the third peroneal muscle and skin of the big toe as well as the medial surface of the second toe. The effect of a direct hit to the deeper peroneal nerve is, palsy, drop foot and paresthesias. Note that in contrast to other forms of nerve palsies, in this type of strike, a greater effect of motor insufficiency and sensory insufficiency may result in the supracondylar. Which may result in knee dislocation and lumber disc disease. The dorsal venous network of the foot is a superficial network of fine veins on the dorsal of the foot and the first dorsal metatarsal artery which may contribute to the above injuries like bruising and swelling of the big toe.

The weapons used to strike Koori point are mainly weapons of the foot. The old charts, strangely enough, do not note the type of weapons used for striking Koori . Master Hohan Sokon’s notes also do not tell us the weapons to use but rather only the methods which are, 1: to tread 2: to crush. In a Chinese manuscript I found one picture which shows the heel of the foot striking Koori. But the Kata and forms of Okinawa and China can show us the mystery. In the long form of Tai Chi, the posture “strum the guitar” ( it looks just like the ancient posture of the Shaolin, you may know it as Enshin-no-Kamae, (see the posture in the article, anatomy of Kamae) and also in the posture called, “single whip advance”. These three postures show us one leg out stretched and the heel of the foot touching the ground. These three postures may be interpreted as, attacker facing north with his right leg forward, the defender facing east, with his left leg extended, with the heel of the leg striking Koori point. In the old form of Naihanchi Shodan there is a posture were the leg is raised and the foot touches the side of the knee and the foot is put back down on the ground with a quick hard stomping motion, (not seen in modern adaptations). This posture maybe interpreted in this way. The attacker kicks to the side of the knee of the defender to cause damage. The defender executes the above mentioned technique of touching his foot to his other knee to avoid the strike. The attacker will be thrown off balance and fall into a flimsy off balanced horse stance. At that point the defender completes the second half of the technique having two choices 1: to break the attackers knee in the same way. 2: strike with the heel of his foot to one of the several striking points on the attacker foot, one of them being Koori.

Now some people say you can learn from your mistakes, well I learned this technique by mistake in my early sparring matches. When on the attack one of my main strategies was to battle close to my opponents body. I like to jet in to range, quickly strike by machine gunning my opponent with blow. One day, just by accident, I shuffle stepped in too close and stepped on top of my opponents forward foot and started machine gunning with strikes and for some reason, my opponent froze in battle! I didn’t think much of it at the time, but when I made the same mistake again, in a later match, the same thing happened again! From then on, I would try to step on my opponents forward foot every time and they all froze! Some time later, after analyzing it a bit, I found that when I stepped on the attacker foot he just could not retreat, but when I rocked forwards to get a better striking range, the ball and toes of my foot would press down on a number of pressure points, the main one was Koori point. And the funniest thing was, they never new what was happening, I caused them to freeze, but they thought they just froze! I later named it, “stop m and drop m”. We will call this technique treading and the use of the heel as crushing. Treading is mostly useful in tournament sparring or two man sets, the use of the heel would be very useful in combat.

We can also think outside the box too, You can always use your big toe as a weapon. You can kick directly into Koori point with the big toe. You can stand up on your toe, atop Koori point. You can shuffle in, step on the opponents forward foot (see above) and press down on Koori point with the big toe and if needed, stand up on your toe too! But what if you are thrown to the ground. You may find a elbow strike it Koori, works wonderfully well.